A downloadable game for Windows

Goblin Gladiator Arena is a Turn Based RPG made for a game jam with the main theme being goblins.

In the world of make believe, young goblins imagines themselves getting into fights against elves, gnomes and armoured apes. Whoever defeats the most imaginary monsters becomes ruler of the playground.

Equipment/Upgrades are used to increase your stats around 1 of 3 builds Tank, Attack, or Magic. Hovering over an upgrade shows the price. Click once to equip. Double click to Purchase Upgrades.

Allies increase only one stat and you can only equip one ally,  Click once to Equip an ally, equipping an ally increases your stats.

Combat takes place over a number of rounds. At the start of each round, you must choose an attack that you wish to perform in that round of combat. A physical attack: (Slashy, Pokey, Smacky) or  a magical attack: (Flashy, Creepy, Muddy), simply click on the attack to lock it in.

Each of the two attack types (physical/magic) have a unique resolution, where the winning attack will hit the opponent, and the losing attack won't do anything.

If the attacks are the same, they end in a draw and have no effect in that round of combat. If you pick a different attack type to the enemy both attacks will hit.

Below is the resolution to each attack type.

After a battle you win, you gain experience and Stonk. Gaining experience eventually allows you to level up raising your stats in general. Stonks are used to buy upgrades in the Pre-Battle Screen.

Launch the .exe and play the game. 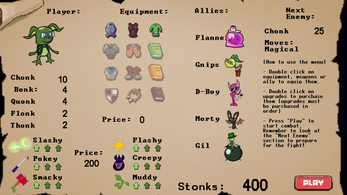 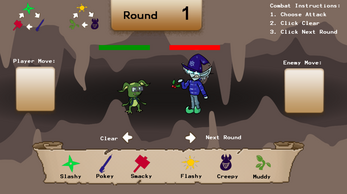